Scotsdale Farm is one of the most beautiful spots in Halton Hills and favourite spot for photographers and filmmakers. 531 acres of rolling hills, woodlands with close proximity to Silver Creek Conservation area. Scotsdale is located on the northern edge of the city, about eight kilometres north of Georgetown on Trafalgar Rd.

Scotsdale Farm is undoubtedly one of the most picturesque places in Halton Hills. These 531 acres of meadows, ancient wetlands, and rolling streams are a favorite spot for photographers and filmmakers. The farm is situated northwest of Georgetown and connects to Silvercreek Conservation Area and Bruce Trail through a series of side trails. While many admire its beauty, few know about the farm’s unique history.

The farm was established in 1938, when Violet and Stewart Bennett purchased the 200-acre property and settled in the area. They gradually acquired more land and over the years, the farm spread over 540 acres. The Bennett’s came from Scotland, hence the name, and their ties to the old country would be instrumental to the farm’s future success.

In 1943, Mr. Bennett hired Maurice Baker as a herdsman and later as the farm manager. Maurice Bakers was instrumental in developing a purebred Shorthorn herd which won top prizes at the Royal Winter Fair and the Chicago International Livestock Show. He was replaced by Emerson Clarke (1961) who continued to develop the famous herd.

After the war (1945), Mr. Bennett purchased several dozen purebred Shorthorn calves from Scotland. The purchase was arranged by the Ontario Shorthorn breeder John Miller, who together with John Blum of Malabar Farms in Libertyville, Illinois brought a herd of more than 60 cattle from Scotland to North American. The purchase was quite risky because North Atlantic was full of mines and the shipment could not get any insurance. Luckily, the risk was well worth it.

Among several of the calves Mrs. Bennett selected one that would become Bennett’s first shorthorn grand champion bull at the 1947 Royal Winter Fair – Princess Deirdre, the dam to a calf named Aspiration. 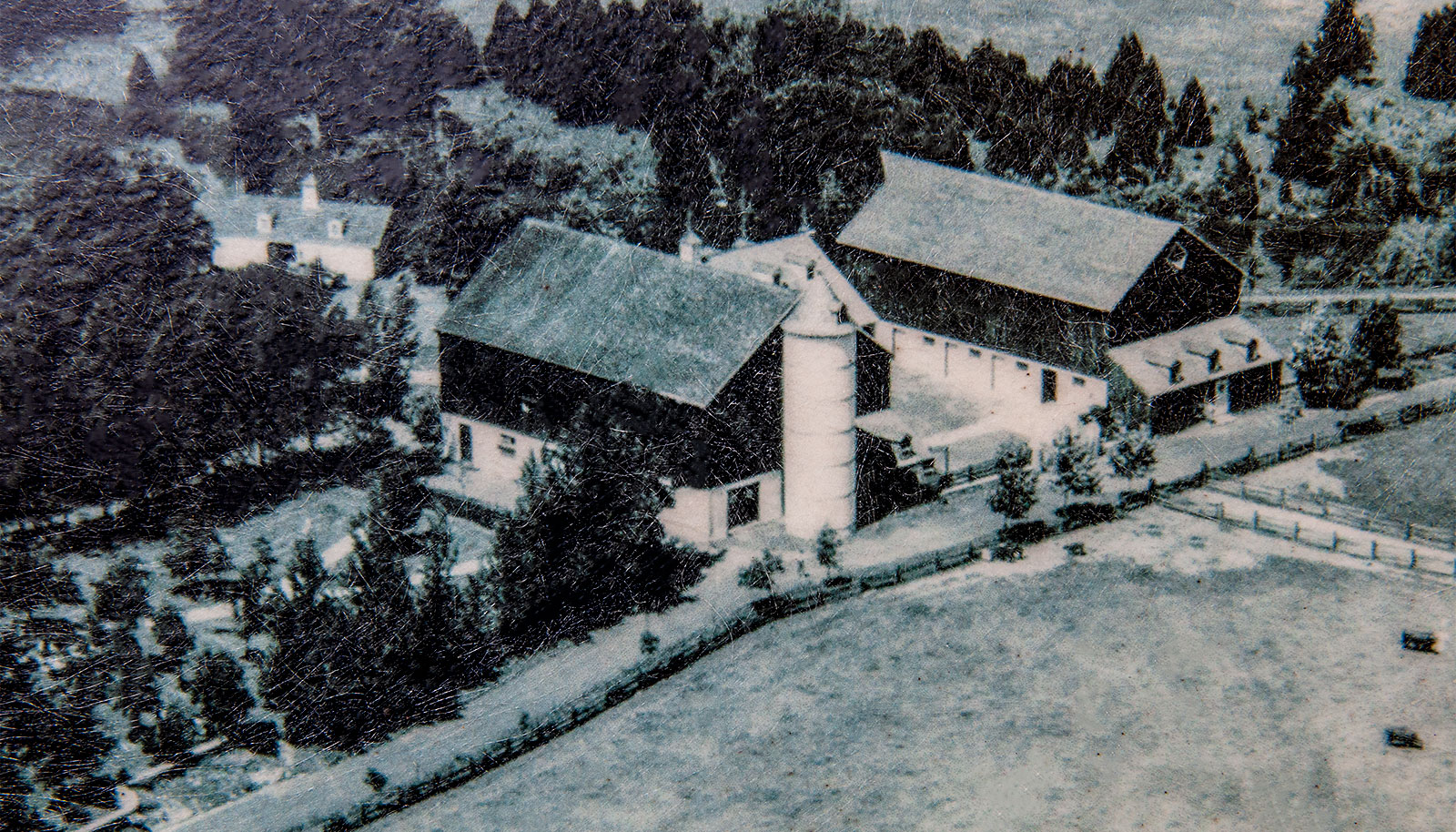 By the early 1950s, farms two lead breeding bulls – Aspiration and Mayflower Ransom (purchased earlier from the Ontario Agricultural College) had become impotent. This was a serious problem at times when artificial insemination wasn’t common. In 1952 Mr. Bennett and Maurice Baker went to Scotland and bought Calrossie Perfect bull for the astronomical sum of 6100 guineas. The farm’s heard expanded and the Bennett’s went on winning prizes at the Royal Winter Fair throughout the 1950s.

In 1970 Bennett’s made history by sending the first Canadian-born Shorthorn bulls (Scotsdale Coinage and Scotsdale Cromarty, both by Scotsdale Tehran) by Air Canada to Scotland (Prestwick) to help revive the new DNA of the legendary breed. 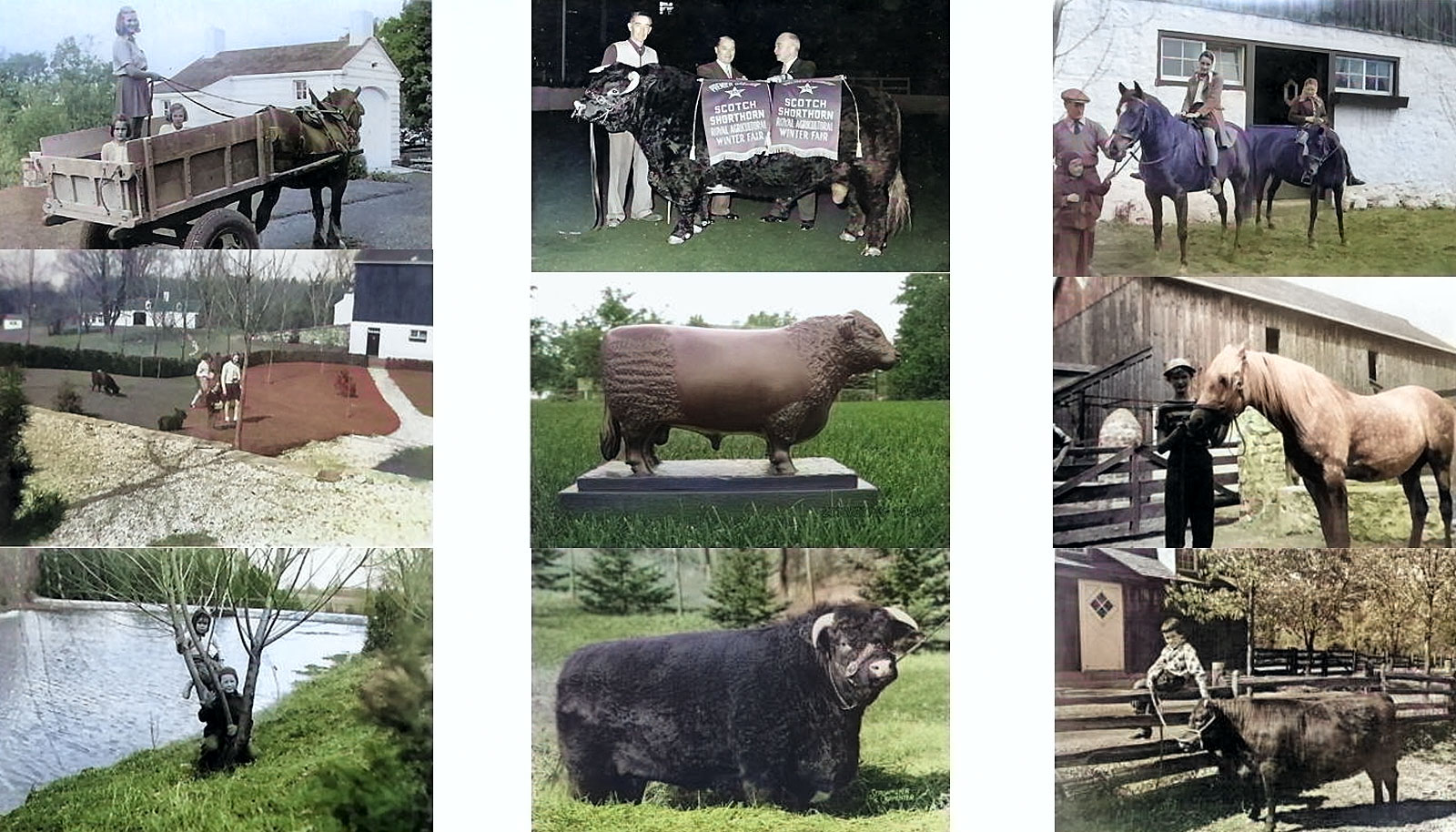 Mr. Bennett had another passion – horses

They initially owned two Clydesdale breeding horses that were so beautiful, one of their guests allegedly uttered: “ Who wouldn’t be a horse’s ass if you could look like that.”

The animals were housed in large gable-roofed barns built in the Early Central Ontario style. The front porch, much loved by visitors, was added much later for film production. 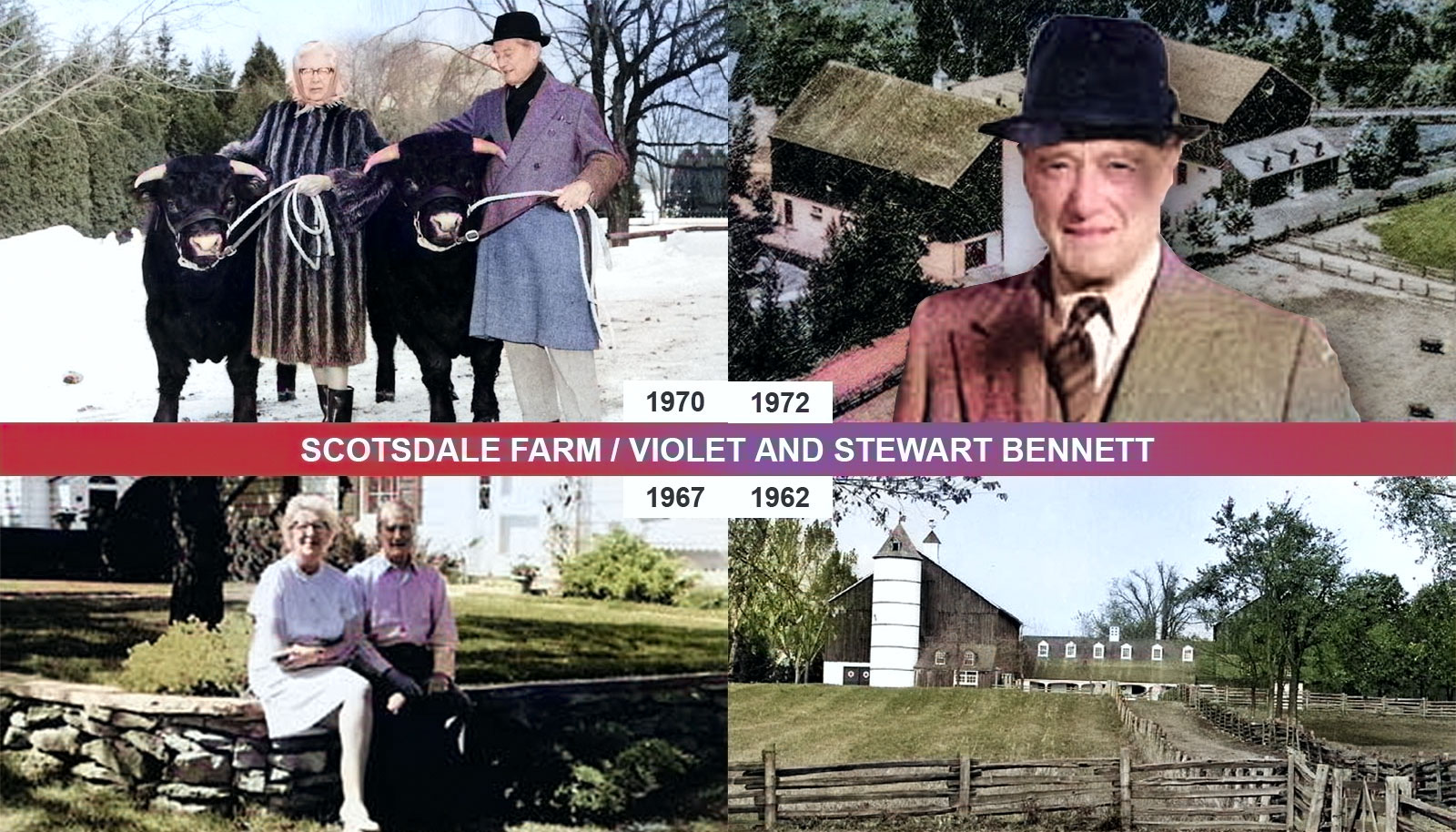 In addition to the farm, Violet and Stewart Bennett owned a condo on Prince Arthur Ave. in Toronto, but rarely stayed there. Mr. Bennett held several prominent positions. In 1944, he became president of Acton’s Beardmore Company. In 1946 he was the Vice President of Canada Packers Inc. – a position he held until his retirement in 1965. He was named president of the Royal Agricultural Winter Fair Company in 1953.

The Bennett Heritage Trail officially opened on Canada Day in 1992. A volunteer-based organization Friends of Scotsdale Farm works with the Ontario Heritage Trust to help maintain and preserve the property for the future.

Violet and Stewart Bennett have forever made their mark on the history of Halton Hills. They have our respect and admiration.