Niagara Escarpment is composed of very old rocks and it is a relatively young landscape feature that is still evolving. The hard dolostone rocks capping the Escarpment are very resistant and so, stand high above the shale-floored plain to the northeast.The escarpment is slowly migrating westward as a block of the dolostone cap falls and slides from it´s crest.

The Niagara escarpment is shaped like a gigantic horseshoe.
The eastern end begins in New York State, just south of Rochester, and runs eastward through Lockport parallel to the shore of Lake Ontario.

The escarpment crosses the Niagara River into Canada from Lewiston, N.Y. to Queenston, Ontario. From there it continues eastward to Hamilton, northwestward across Ontario to Osler’s Bluff and Blue Mountain near Collingwood, westward to Owen Sound, and northward to Tobermory at the tip of the Bruce Peninsula. Along this peninsula it forms the west shore of Georgian Bay.

At Tobermory it disappears beneath the waters of Lake Huron, to reappear on Manitoulin, Cockburn, Drummond and St. Joseph’s Islands. From there it extends to the western side of Lake Michigan, forming part of the shoreline in the Green Bay area. The western end of the horseshoe lies in Wisconsin.

WHAT IS THE NIAGARA ESCARPMENT?

The Niagara escarpment is a topographic feature of variety and beauty. Essentially it is a product of erosion, the work of water over hundreds of millions of years. It´s rocks are of sedimentary origin, being formed from muds, sands, and calcareous oozes laid down on the floors of prehistoric seas which covered this part of North America some 400 million years ago.

In many places they have been mantled by clays and sands left by the Great Ice Age; these deposits have greatly transformed the escarpment profile. In other places the rocks are drowned beneath the central Great Lakes.

The sedimentary rocks of the escarpment occur in nearly horizontal layers. Two of their units can be recognized readily by the amateur.

The second easily recognizable unit is the Lockport dolomite, a layer of hard rock which caps the escarpment throughout its course. Dolomite is similar to limestone (calcium carbonate), except that it also contains some magnesium.

Between the Lockport-Amabel dolomites and the Queenston shales lay layers of other sedimentary rocks (sandstones), Iimestones, and other shales and dolomites.

We have already seen that from above, as on a map, the escarpment is shaped like a horseshoe. In cross-section, it is much more like the rim of an enormous saucer, which has its centre (the Michigan basin) in the state of Michigan.

In southern Ontario, the edge of the saucer is far from uniform. In the first place, parts of it are much higher than others. Near Queenston, the escarpment is about 500 feet above sea level. In the Bruce Peninsula, it varies between 600 and 900 feet. Yet in between, around Collingwood the elevation is more than 1700 feet. The rise is caused by a broad upfold in the rock formations, known as the Algonquin Arch. ln effect it is a large crimp in one edge of the saucer.

WHEN WAS THE ESCARPMENT FORMED?

The history of the escarpment is locked within the rocky wall itself. The story emerges from evidence to be found in the layers which make it up, in the mantle of clay which partially covers them, and in the rocks of the surrounding area.

If you drill deep enough anywhere in southern Ontario you will eventually reach the ancient rocks of the Precambrian Shield familiar to many people because they covers the Georgian Bay, Muskoka and Haliburton areas. They are about 1,000 million years old.

The typical Muskoka outcrop consists of gneiss, a term which indicates a metamorphic rock, one which has been altered from something else. Geologists cannot be certain what the original materials of the gneisses were, but they are reasonably sure that the chemical and physical processes involved in their formation took place some five to ten miles below the earth’s surface, in the roots of a mountain system.

Thus, 1,000 million years ago there must have been “Muskoka Mountains” which would have rivalled any modern range. Since we see no such mountains there today, what happened to them? It is very simple, they were eroded away. Just think of the enormous amount of time it must have taken to remove untold cubic miles of rock from these mountains, in order to reduce them to the nearly flat terrain we know today, and to expose their roots… the gneisses!

It is not surprising therefore that the next chapter in our history starts some 500 million years after the formation of the gneisses.
Between 500 and 300 million years ago, seas periodically flooded southern Ontario. On their floors, a few thousand feet of sands, muds, sea shells and reefs buried the Precambrian surface. Some of these deposits became the rocks of the Niagara escarpment.

On the eastern shore of the seas, during Ordovician and early Silurian times, rose the young Appalachian Mountains. Rivers flowed from them to the inland seas, carrying sands and muds which formed large deltas at the river mouths. Seaward from the deltas, away from the muddy waters, calcareous sediments built up on the sea floor.

Over an immense period of time the deltas turned into the sandstones and shales of the southern section of the escarpment. Carbonate rocks such as the Manitoulin dolomite formed from the calcareous sediments. Eventually, all the seas cleared of muddy sediment and the Lockport-Amabel reefs flourished.

WE TALK ABOUT THE SEDIMENTS TURNING INTO ROCKS. HOW DID THIS HAPPEN?

At first the sediments on the ancient sea floors contained a considerable amount of water in the pores between individual grains of sand and mud.
But as succeeding layers slowly built up, downward pressure from their weight forced this trapped water out from the bottom layers. At the same time, or perhaps later, deposits of certain minerals-limonite (iron oxide), quartz (silicon dioxide), calcite (calcium carbonate) or dolomite (calcium magnesium carbonate) formed between the grains, and cemented the whole mass. The process (lithification, or cementation), took an immense amount of time.

The final retreat of the seas, perhaps 300 million years ago, left a blanket of sediments thousands of feet thick over the Precambrian surface. In this blanket, the basic materials of the Niagara escarpment were only a partly buried. To shape the escarpment and expose it’s framework required about 300 million years. Further important changes in the terrain began with the Ice Ages one million years ago.

Finally came a mere 10,000 to 12,000 years of post-glacial erosion which is still slowly altering the appearance of this outstanding Ontario landmark.

HOW WAS THE ESCARPMENT SHAPED?

The ancient seas left behind them a flat, featureless limestone plain. From it an ever-changing pattern of rivers carved the Niagara escarpment. By the time the first glaciers advanced a million years ago, the escarpment looked essentially the way it does today.

The geography of these ancient waterways will never be known exactly, but we can form deductions from the traces they have left. In general, they followed the slopes of the Algonquin Arch.

Drilling in the Richmond Hill area shows a large valley in the bedrock beneath the glacial deposits. This valley must have contained a river running southeast into the Lake Ontario basin. In that case, there must have been a divide in the Lake Simcoe area from which streams ran northward and southward.

The ultimate outlet for the waters of the pre-glacial river system whether it was to the; Gulf of Mexico via the Mississippi Valley, the Atlantic Ocean, or even both has been a subject for argument for over half a century.
The weight of current evidence suggests that the water drained through the Mississippi Valley.

Today we can still see the details of the erosional process which shaped the escarpment.
Streams and rivers continue to carve valleys into the escarpment wall: Spencer Creek at Webster’s Falis, above Dundas and the Credit River at it’s forks.

In craggy segments such as the headlands of Cape Croker, Osler’s Bluff, parts of the Beaver Valley, and above Milton. The explorer can find accumulations of large angular blocks of dolomite, called talus that have slumped off the vertical wall.
The “caves” at Collingwood are also in such an environment.
In areas like these we can see how over scores of millions of years, the escarpment worked it’s way westward across the southern part of the province. Here and there we can also see where the process has not been complete, and has left outliers cut off from the main escarpment, as at Mono Centre and near Creemore.

We have no way of estimating the rate at which the Niagara escarpment has eroded. The only figures available are for Niagara Falls, which are slowly retreating upstream as the rock face recedes beneath the force of the cascading waters. Before remedial work began near the Canadian Falls, the retreat was estimated to be about 3 feet per year. But obviously this is a special case because of the large size of the Niagara River, and no other part of the escarpment is being changed so rapidly.

You may also find true caves in some areas of the escarpment.
One example is Mackenzie’s Cave, on Bronte Creek, where William Lyon Mackenzie is said to have taken refuge in 1837 after the failure of his rebellion. In other instances, waves from pre-glacial lakes appear to have eroded out large amphitheatres along the cliffs.

These features, which are not really caves at all, are most common on the Bruce Peninsula, for example at Hope Bay.This the Niagara escarpment, carved from a featureless plain, helped to shape the post-glacial appearance of southern Ontario. The interplay between the retreating glaciers and the escarpment wall is perhaps one of the most interesting and intriguing parts of our glacial history.

The answer to this question Iies in the rocks of the escarpment-their nature, their succession, and their response to erosion by running water.

WHO HAS STUDIED THE NIAGARA ESCARPMENT?

In 1836, James Hall introduced the term “Niagaran” to describe that part of Earth´s history recorded by escarpment rocks (since renamed Silurian).
One of the earliest descriptions was written by Sir William Logan, first director of the Geological Survey of Canada. In Geology of Canada, published in 1863, he wrote of the “Middle Silurian escarpment” and the ravines notched into it:
While the bedrock has been thoroughly examined, the same cannot be said for glacial phenomena connected with the escarpment. From the pioneer studies of Leverett and Taylor to the regional work of Chapman and Putnam, much has been learned.

Cliffs along the Niagara Escarpment have the oldest forest ecosystem in eastern North America.

The oldest tree in Ontario is an eastern white cedar from 688 A.D. The oldest known tree in Wisconsin, a 1,300 year-old eastern white cedar, was found in Brown County.
It’s segments of rugged beauty make the escarpment a favourite spot for tourists and outdoor recreation.
The Bruce Trail, a hiking route from the Niagara River to Tobermory, has done much to focus attention on it’s continuity. 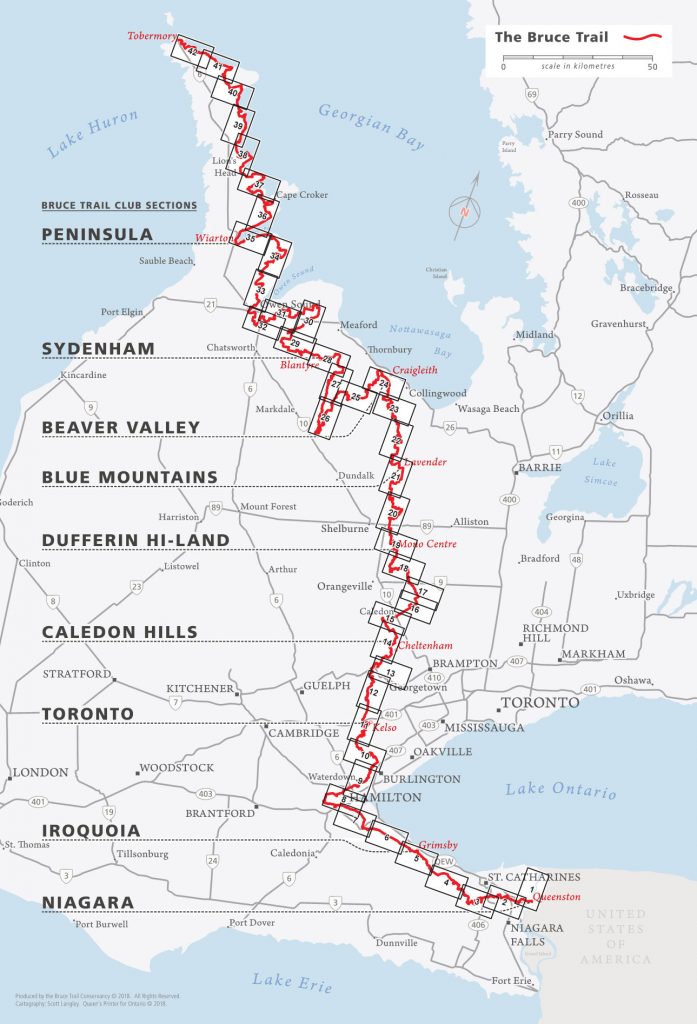 Old growth forest with over 250 year old at Scottsdale farm
Rockwood. Limestone cliffs, caves and glacial potholes
Misery Bay. Ancient sea with stone bottom and unique alvar
The Bruce Trail 890 km. Canada’s oldest and longest marked footpath.
Monumental Flora Graeca is one of the most remarkable illustrated floras ever to see
What wildflowers are in Canadian provincial and territorial symbols?
Rattlesnake Point. Home of ancient cedars and limestone cliffs
Mirko Hanak was a brilliant illustrator of natural subjects