Maple syrup is produced only in the northeastern part of North America. The species of maple primarily used to make maple syrup is the sugar maple (Acer saccharum).

When the first people discovered the area where the trees known as Sugar Maple  grew many thousands of years ago, they must have soon noticed their sweet sap. This was both when felling the trees and when discovering the frozen sweet icicles called “sapsicles”.

Through various experiments with the processing of sweet sap, the knowledge quickly spread to different tribes. To this day, there are many myths or outright made-up stories about how people began to process maple syrup.
In any case, it is known that the indigenous people created so-called sugar camps, where they cut trees and collected sap in containers. The sap was then thickened on hot stones.

Maple sap can be processed in three basic ways:

1. As a juice that was drunk. It contains about 2% sugar.

2. As maple syrup, but it was only made widespread by solving its storage.

3. As maple sugar, which could be stored for some time.

Maple sugar was most ideal for the original inhabitants.
They even produced three types of maple sugar: grain sugar, cake sugar and wax sugar.

After the arrival of the first European settlers, Jacques Cartier’s expedition in 1536 and 1542 noticed the properties of sugar maple.
In 1606, the lawyer, traveller and writer Marc Lescarbot described the harvest as a distillation of maple sap. After him, many missionaries used this knowledge of the Native Americans.

Around 1676, iron cauldrons began to be used for cooking.

In the early 18th century, Paul Dudley wrote a book devoted to the production of maple sugar from what he called “maple sugar juice,” providing the most scientific explanation of the process to date.

But it wasn’t until around 1790 that the practice of drilling into trees and drawing the sap into large containers began to be used. Large quantities of sap were withdrawn in this way, and as the densification process was perfected, the business began to develop.

Around 1850, large flat metal pans became available. The enlarged surface proved to be much more efficient than the iron kettles previously used, and evaporator buildings also began to be built.

It wasn’t until the early 1950s that how to safely store maple syrup was circumvented and the popular 540ml tin began to be used. 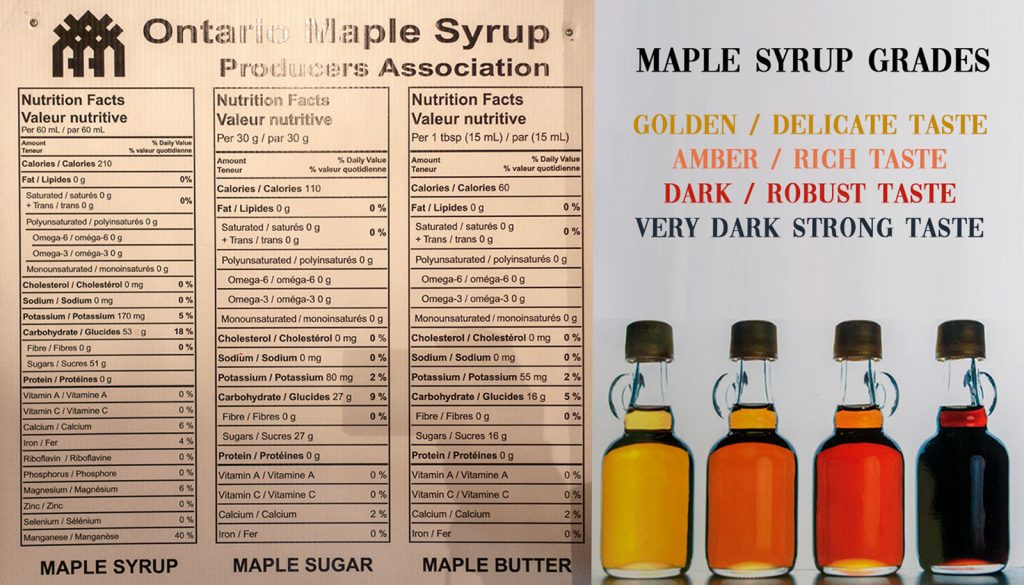 Why does sugar maple sap flow?

The pattern of freezing and thawing temperatures (below freezing at night and 40-45 degrees Fahrenheit during the day) creates pressure in the trees that causes sap to flow out of the tap holes.

1. A hole is drilled in the tree ( min. 40 years old) and a spout is inserted to direct the sap into either a bucket or pipe

2. From the storage tanks, the sap is diverted to the evaporator where it boils and releases a large amount of sweet steam. As the water in the wort evaporates, the wort thickens.

3. At a temperature of 219 Fahrenheit, the syrup is ready for withdrawal. Next, it must be filtered, adjusted for density, and graded for flavor and color. Maple syrup is considered maple syrup when it reaches a sugar concentration of 66% sugar.
The production of one gallon of maple syrup requires approximately 40 gallons of sap.

The classification of maple syrup is based on its color and its flavor profile.

Acer saccharum, the sugar maple is a native to the hardwood forests of eastern Canada and eastern United States. Sugar maple is best known for being the primary source of maple syrup and for its brightly colored fall foliage
Acer saccharum is a deciduous tree normally reaching heights of 25-35 m (80-115 ft), and exceptionally up to 45 m (150 ft).
More >>

Did you know?
Comfort Maple, one of the oldest sugar maple trees in Canada

How did Credit River in Ontario get its name?
Grey Owl wanted to protect the forests and animals of Canada
First in North America. The Barber Mill Dynamo in Georgetown
Monumental Flora Graeca is one of the most remarkable illustrated floras ever to see
Cup and Saucer, Manitoulin Trail with dramatic 70m cliffs
The Algonquin Logging Museum. Take a step back in time
Terra Cotta. Hiking trails, red soil, wettland, lake and pleasant forest
Frozen Niagara Falls like the last Ice Age. 18,000 years ago